I stepped up to the exit Immigration Officer in St. Maarten. She said, “Girl, where are you going?” Unable to tame my smile, I replied, “Trini Carnival!” She then said “You are gonna be on Team No Sleep”, and with that, the adventure began. For every Soca Lover/Island girl, Trinidad Carnival is the dream: The Soca Mecca.

I waited on LIAT, anxious for its arrival. Given their notoriety for being delayed, I wouldn’t condone missing my connection. Luckily, the flight arrived on time and we left shortly thereafter. I was dreading the many stops on LIAT to get to Trinidad; however, I was lucky to meet a very nice Antiguan, named Misty, who helped me keep my sanity. The Caribbean is full of warm friendly people. We chatted about the differences between Antigua and St. Maarten. She told me that this was her third year going to Trinidad for carnival and we were both excited of what was to come: Bacchanal! After we arrived, we exchanged information and I promised we would meet up at one of the fetes. Given that I was lucky enough to be accompanying my husband, Shyam, on his trip for the Angostura Global Cocktail Challenge, I was ready for the trip to start.

Upon arriving, it was determined that we were going to a cooler fete. For those who don’t know, a cooler fete is a party during which you are allowed to bring your own cooler with drinks. Considering the state of the world, this a recession proof party. We stocked up our cooler and were on our way to Blue Range. The fete was in full swing when we got there.  The crowd was massive, at least for this small islander’s standards. Bake & Shark and Corn soup to the left, Skinny Fabulous and Kes on the stage: what more could I ask?

Saturday was a whirlwind of meeting up with family for breakfast, lunch at Jaffa’s with the Angostura delegation and Panorama Finals. At lunch, we were fortunate to try the first taste of the 15 year old Angostura Rum that they are about to launch. Imagine seeing the Angostura Master Blender pouring something out of a bottle with a handwritten label! The new rum is super smooth, velvety rum, so needless to say, I was in heaven. The Trinis know about rum! Jaffa’s put out an elaborate spread, showcasing all of the rich flavours in many of Trinidad’s local dishes. The Panorama was a sight to be seen and heard. The enthusiasm with which all of the pan members play is infectious. It makes you want to move! 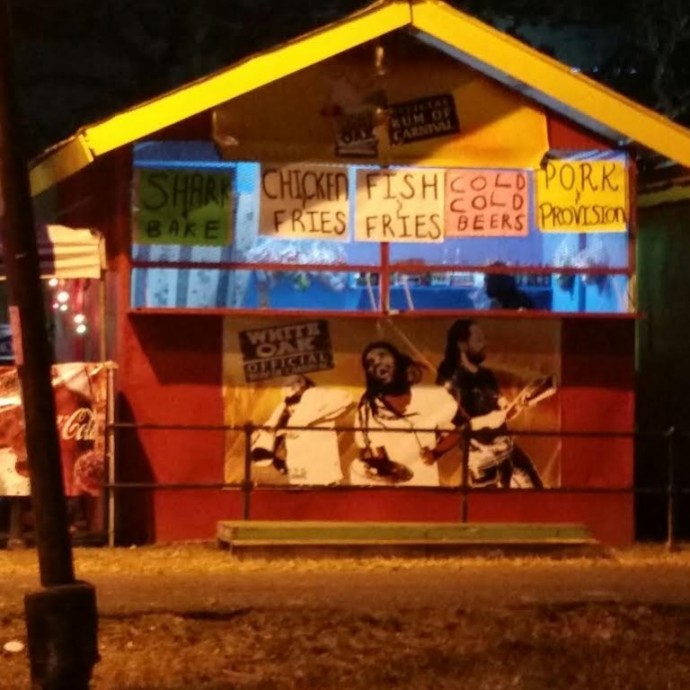 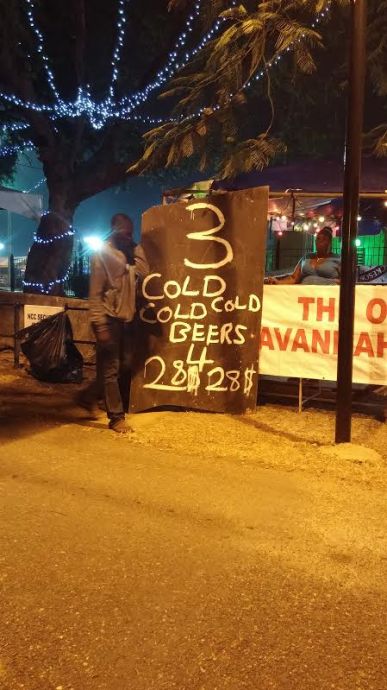 One of the main reasons that I love to travel, is meeting new people. I was fortunate to meet so many lovely people. Notably, apart from Misty, I met Claire. Upon meeting this feisty Brit, she proceeded to tell me a story about an eventful camping trip that ended with her kicking a raccoon. (You had to be there :-P) Also, I now know the difference between a Southern and Northern English accent and I learned some very interesting curse words!

Right after the Panorama, we stopped at Stumblin’- a bar on the infamous Ariapita Avenue. Stumblin’ was full of ‘vibes’. The avenue is home to many bars and restaurants and is seemingly always alive. Music spewed from each bar and patrons danced and had a good time. After Stumblin’, we decided to get some street food. I ordered doubles with slight pepper. While I really like pepper, I was told that even ‘slight pepper’ was enough. It wasn’t. The doubles man maybe had pity on me since I was a tourist. For those who don’t know, doubles is street food. It is two barras (flat bread) with curried channa (chickpeas) and topped with mango, shadon beni, cucumber, coconut or tamarind. After I made a complete mess, I was instructed by my Sxm/Trini friend Candace, on the correct way to eat “ah doubles”. I still was not successful 🙂

Sunday was the day of the Angostura Global Cocktail Challenge. Of the 12 competitors, we went to cheer on our friend and local bartender, Paul Peterson. Paul gave a great effort; however, the judges ruled that the 3 top bartenders were: Trinidad, South Africa, & Canada. Each bartender showcased their culture, knowledge and skills. Each of them proved, in very different ways, that they deserved to be there. The participating countries were: Australia, Brazil, Canada, England, New Zealand, South Africa, South Korea, St. Maarten, Sweden, Trinidad, and USA.

Sunday night turned into Monday morning. Bright and early, at 3 in the morning, we were ready: ready to hit the streets and jam in J’ouvert. J’ouvert is nothing new to any carnival goer. J’ouvert comes from the French “Jour Ouvert” which means day break and it is a moving street party that starts in the wee hours of the morning with trucks with speakers that revelers dance behind on a specific route. Our J’Ouvert band was the Duck Crew and we all had funny duck hats and lots of paint. We were halfway into the jump up when the DJ shouted, “We are almost ready to cross the stage!” I wasn’t sure if I had heard correctly. The stage is usually reserved for Mardi Gras. Since St. Maarten doesn’t have that kind of stage, I hadn’t been on a stage since I was 14 when I went back to St. Vincent for carnival. I thought to myself, “I must have heard wrong.” I didn’t. Sure enough, we were turning into the Savannah getting ready to ‘cross de stage’. I was elated. As we charged across the stage, jumping and waving, I was instantly propelled into a euphoric state, bringing me right back to my 14 year old self. Was it the drinks, the music or ‘de vibes’? Of that I cannot be sure. 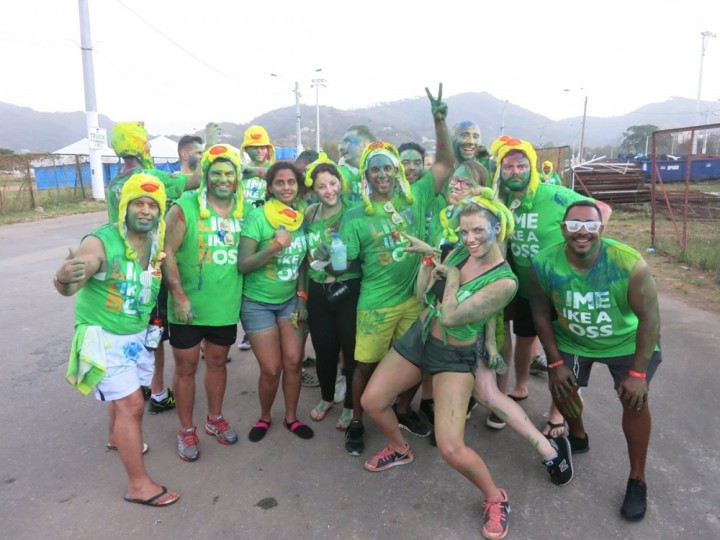 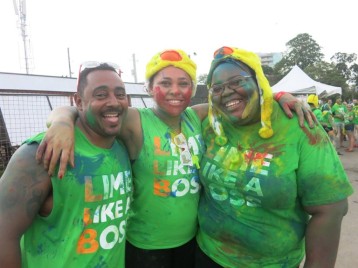 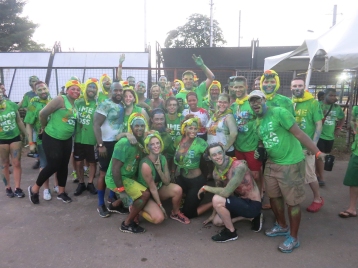 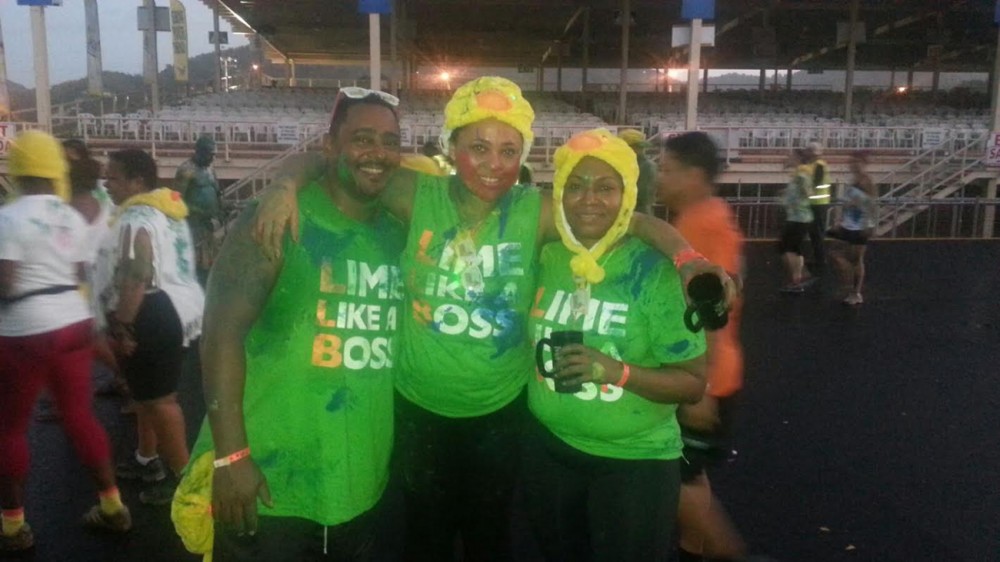 Us on the stage!

After 2 hours of sleep, we were escorted to the bus to go “Down-the-Islands”. We were taken to the dock and onto a ferry blasting soca music. Again, I was in heaven. It was a nice easy ride down to Gasparee Island and we had some more good food and -big surprise- lots of rum and coconut water. 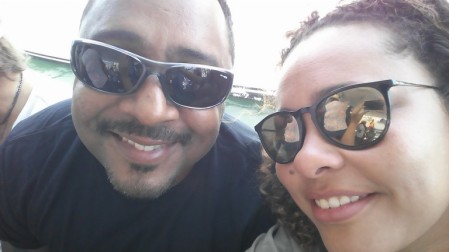 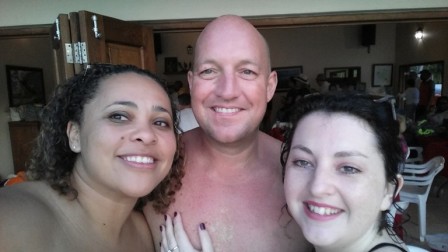 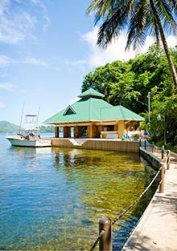 At this point, I was starting to think that I really should have brought some vitamins! I figured as long as I kept the flow of rum and coconut water steady, I would be fine. Mardi Gras or Carnival Tuesday started early for some of the group getting make up done at 1:45 a.m. to ‘play mas’. The rest of us went to a lovely bar and restaurant called Shakers and enjoyed the parade with food and-of course- more rum. The troupes paraded and danced in costumes with feathers and beads of every colour. If you’ve never seen carnival on a big island, the grandeur of the troupes is awesome and breathtaking. Although I didn’t play mas, I jammed on the sidelines and had the time of my life.